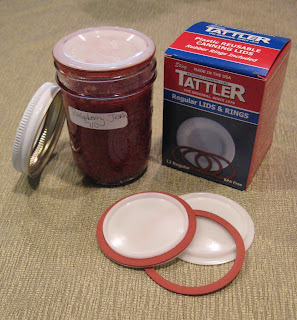 My neighbors are out of town, but before they left for the weekend, I managed to strike up a deal with them. They have a gorgeous hedge of raspberries, and I know they usually just eat them fresh and freeze some for later. I offered to make them some jam in exchange for weekend berry-picking access, and they were happy to oblige! So yesterday my children and I headed over and had six cups of ripe, juicy berries in about 30 minutes.

We headed back across the driveway and I began my jam making process. I like to use Pomona's Pectin. You can double, triple, quadruple, or whatever to the batch(es) of jam, and can use as much or little sweetener as you like with a great gel result. I like to use evaporated cane juice because it's less expensive than the other options, but honey, agave, or even fruit juice concentrate have all worked nicely (you can also use artificial sweeteners, if desired).

I have some new canning lids that I wanted to try out as well. Ball and Kerr metal varieties have always been good to me, result-wise, but they are now being lined with Plastisol. Plastisol has BPA in it. So even though you're canning organic produce and trying to provide healthy fare for your family, you're still exposing them to a nasty, hormone mimicking, estrogenic chemical. Ugh. Enter Tattler canning lids.

Tattler canning lids are plastic also, but they're BPA-free and come with a loose rubber ring to create a tight seal. As an added bonus, they're also made in the USA! While I did have to purchase several sets, I would've had to buy a lot of Ball/Kerr sets this summer instead, and the Tattler ones are reusable. I figure I'll make up the extra cost in two or three canning seasons.

If you choose to try out the Tattler lids, follow the directions precisely. I thought I had as I was jamming, but two of my jars did not seal properly. I ended up reprocessing the two to see if I could get it right, and it worked perfectly the second time around. They want you to tighten the ring, then loosen it again before boiling the jar. I did that step, but when they came out of the water bath I didn't re-tighten them. Apparently that's critical because it helps them to form a tight, safe seal once cooled. So after they'd cooled completely I removed the rings, checked the seals, and all were perfect! I could lift the jars by the plastic lids.

I don't like that the lids are plastic, but I do see where metal can give an off taste to highly acidic foods. At least they're BPA-free, reusable (some people have some that still work after 25 years!), made in our country and not out-sourced overseas, and easy to use (once you get the hang of it). You can also use them in pressure canning. Now if only I could find an acceptable substitute for the Plastisol-lined lids for the more decorative jars that I use for gifts!!
Posted by bakingincircles at 1:07 PM

Email ThisBlogThis!Share to TwitterShare to FacebookShare to Pinterest
Labels: Canning/Preserving, Ingredients For Life